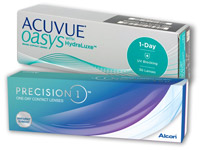 Daily disposable soft contact lenses are taking the contact lens market by storm, and more so daily disposable silicone hydrogel lenses. PRECISION1 from Alcon got introduced in the spring of 2019 down-under and later in the US, while ACUVUE OASYS® 1-DAY was introduced in 2016. While Alcon released a clinical study pointing out the advantages of PRECISION1 over 1-DAY ACUVUE® Moist, it's time to compare PRECISION1 to the ACUVUE OASYS® 1-DAY, one of the contenders in the daily SiHy lens category - after all 1-DAY ACUVUE® Moist isn't a SiHy lens.

Our Take on Two Amazing Lenses

Let's start with the prescription-related parameters. Both lenses cover a wide range of sphere powers from -12.00D to + 8.00D. The replacement schedule (daily) and the wearing modality (daily - no overnight) are the same, however, ACUVUE OASYS® 1-DAY is available in two different base curves - 8.5 mm and 9.0 mm - while the base curve of PRECISION1 is 8.3 mm. If your eye care professional is prescribing ACUVUE OASYS® 1-DAY, he/she has a bit more flexibility choosing from two different base curves in the fitting process. Alcon might follow-up with another base curve later, but at the time of writing this (August 2018), it's the 8.3 mm base curve version that's available for now.

Both lenses feature a SiHy base material and the lenses are Class V lenses according to the proposed new lens classification by the FDA. The water content of PRECISION1 is 51% compared to 38% seen in the ACUVUE OASYS® 1-DAY spec sheet. This doesn't sound like a huge difference but Alcon's PRECISION1 features a new surface technology that increases the water content at the surface to 80% while keeping the water content at 51% in the core. According to Alcon, this technology (called SMARTSURFACE) is supposed to increase the wearing comfort throughout the day. Maintaining a high level of oxygen transmission while keeping the lenses moist is what manufacturers are aiming for.
Both lenses feature Class-1 UVA and UVB blocking. It's nice to see that Alcon has been adding UV blocking to the PRECISION1, a feature that has been present in all ACUVUE lenses for a very long time.

Our cost calculation for PRECISION1 is based on an estimate after a comment by Alcon, that the lens will be priced somewhere between the DAILIES AquaComfort Plus and the high-end DAILIES TOTAL1. and we will update the specs once the lenses are available online.

We can't wait to see some patient reviews for PRECISION1 knowing that the ACUVUE OASYS® 1-DAY has already received a lot of applause by patients and eye doctors around the globe.

What's your take on these two lenses. We would love to get your feedback!

More about this Product

Are you paying too much for your contacts?

Find the best prices from the most popular retailers